Vault Productions press release (October 15, 2018) – The fourth installment of the Vault Productions documentary series on the history of the New London-Waterford Speedbowl is set for release on October 23, 2018. 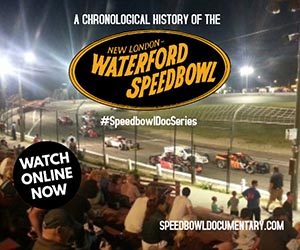 Part 4 will be available via the Vault Productions YouTube channel and their network of websites:  speedbowldocumentary.com, speedbowlhistory.com and sidsview.com.   The first three films (collectively covering 1951-1984) are already available online.

Part 4 picks up in 1985 when Stafford Speedway owner Jack Arute leased the Speedbowl from Harvey Tattersall Jr.  The 3-year reign was overseen largely by Ed Yerrington, a former Modified Champion at Stafford who was the GM at both Arute tracks during 1985-1987.  In 1988, the relatively unknown Korteweg family put together an investment group to buy the track and they ran it until 1994.  The Arute family contributed to the research for Part 4, while Dan, George and Wayne Korteweg are all featured in on-camera interviews.  The film covers many aspects of track management by both groups, including NASCAR sanctioning, creating new divisions, major renovations to the facility, non-racing events, and a 3-year long battle with local residents who were opposed to the Speedbowl’s existence.

On the track, there are in-depth profiles of many Speedbowl stars including Bob Potter, Dick Ceravolo, Brian McCarthy, Phil Rondeau, Jay Stuart, Tom Fox, Ted Christopher, the 2nd generation of Gada siblings and Johnny Cambino, who returned to weekly racing at the age of 62.  There are also segments on memorable events like the ‘Legends of the Speedbowl’ races where retired drivers competed in Strictly Stock cars, the night Bob Potter flew over the backstretch wall in 1991, the huge fire on the front stretch during an SK Modified race in the summer of 1994 and the wild finish to the 1992 Limited Sportsman Championship.

“We are excited to have completed the next film in this series, ” said executive producer & track historian Tom DiMaggio.  “There are important parts of the Speedbowl’s history in this chapter.  The track’s cosmetic look takes the shape of what we see at the track today during this era.  The SK Modified, Sportsman, Mini Stock and Enduro divisions of today all began in this era and the battle with town residents over the noise ordinance was a major threat to the track’s survival in the early 1990’s”

In addition to Stafford Speedway, there are stories involving Thompson Speedway as well as since-closed tracks like Plainville Stadium, West Haven Speedway and Riverside Park Speedway.

“Much of the feedback we’ve received in the last year or so is that Part 4 is the installment that is most anticipated by the Speedbowl community.  More than the first 3 films, people will see interviews and stories about people they are familiar with and still see at the track today.”  DiMaggio added that he hopes if people use Part 4 as their introduction to the series, that they’ll like the content and go back and watch Parts 1-3 as well.  “Each film can be watched as a stand-alone film, but it is a continuing series that was meant to be watched in order.”

The stories in Part 4 are told by 41 different Speedbowl personalities – the most participants in any of the 4 films to date.  The running time is 146 minutes, the longest installment to date.  DiMaggio’s production crew for Part 4 includes Jesse Gleason, Brent Gleason, Bob Lucas, Kathy Courtemanche and DiMaggio’s wife Tiesha.  DiMaggio handles all the research, editing and marketing for the entire series as executive producer.  He is also the music supervisor, painstakingly going through hundreds of pieces of music until he finds the one that perfectly fits the segment he’s editing.  “Having the right music in each piece is essential in making the film enjoyable to watch,” DiMaggio admits “It can be a frustrating process, but once you get the right music to use, it really is worth the time and effort.”

“It has been an incredible experience producing this series.  Ultimately I’m still a fan of the Speedbowl at heart, so to have the opportunity to sit with all these people and capture their stories was so rewarding.”  DiMaggio added, “Behind the scenes, we’ve had challenges.  We started with little.  Only Jesse had experience in producing a documentary and our initial equipment wasn’t great.  Since we’ve started in 2010, we’ve updated equipment multiple times.  And sometimes in the edit of the interviews, that shows.  But with the limited resources we’ve been working with, we didn’t have the time or budget to do re-shoots of older interviews with new equipment.  Despite all that, or the long post-production time involved with each film, the content is really good and I’m extremely proud of how these have been turning out.  I believe you’d be hard pressed to find another short track in the country whose history has been preserved like we’ve done with this project”

‘A Chronological History of the New London-Waterford Speedbowl’ is an independently funded series produced almost exclusively from support of the Speedbowl community.  Part 4 is once again sponsored collectively by Waddell Communications, Belltown Motors, Michael V. Williams Builders LLC, Nick’s Service Center, Honest John’s Used Cars, ServPro of Norwich and GRE6, all of whom previously supported the Sid’s View web series at the Speedbowl.  “We couldn’t be more fortunate for these sponsors who’ve helped us get this far.  There’s been so many other contributors, from people who came to our winter party fundraiser last January to others who’ve made private contributions, they all have a part in this.” said DiMaggio.  Parts 5 & 6, which are set to cover the eras of 1995-2005 and 2006-2014 respectively, are currently in production and seeking further sponsorship.

The dedicated website for this project (speedbowldocumentary.com) has details on each film in the series, photo galleries from the interview shoots and links to all videos available online.  They will also have an online store launched on October 23rd for those interested in purchasing the series on DVD.  People or businesses interested in sponsoring the rest of the series can contact the Vault Productions team directly through the website or email sid@vault-productions.com.

“With the racing season coming to a close, we hope everyone will find the time to watch our latest film.  And hopefully give us feedback, share it around social media and help us get the word out on this series”  DiMaggio said.  “The one thing I’ll guarantee is that it’ll be entertaining to watch”